This article tells you how to make your own LED liquor shelfs.  They would look fantastic in room, especially a bar area.  Lighting is essential for any project when it comes to interior design.  If you are constructing a home bar, then it is especially important to get the lighting right! Good lighting effects can transform the entire atmosphere of your bar, and set the mood.

You may be wondering why we are talking about LED lighting only? Well, this is becuase LED lighting has many advantages over other types, such as halogen and flourescnt.  In general, LED lighting is more energy efficient, durable and longer lasting.  There is also a wide variety of colours when it comes to LED lighting, some which can even be control accuratly via a remote.

Why LED’s Strips for Lighting Glass

Although LED bulbs are rather large, LED’s themselves are infact very tiny.  The size of an LED can be on the mm scale, or even microns! This means that hundrends of LED can be compacted into tiny spaces, which allow them to be flexible and versatile in there colours.  The best way to light a pane of glass is via the glass edge, which means a narror strip of LED’s is required.  The good news is that such a thing exists, called LED strip lights.  They are a strip of LED’s usually upto 12mm wide, and a few mm thick.  There are many variants when it comes to LED strip lighting, but most have the following characteristics:

What Glass to Use with LED Strips

Light up shelving can provide your guests with a memorable experience.  They look extra cool when used in a bar environment, as liquor bottles or glassware can be placed on top of them.  It provides a more a chilled out atmosphere, creating the vibe most want in a home bar.

One might assume that any type of glass can be used for light up shelves, but they would be wrong! Below are the things you need to consider when trying to light up glass with LED strips.

Standard glass has a greenish-blue tint to it, which will have a negative effect when trying to light it using LED strips.  You should buy a higher clarity form of glass known as low-iron glass.  The low levels of iron removes the greenish-blue tint from the glass pane.

The best way to light up a glass pane, is to light it up via the edge.  For a bar, we reconmend a glass thickness between 6mm – 10mm.

If you shine an LED strip through the edge of a totally clear pane of glass, a majority of this light will be seen at the opposite glass edge.  Ideally you also want to see the light effect on the shelve surface.  This can only be acheived if the top surface of the glass has been sandblasts or etched by the glass manufacturer.  It results in a frosted surface which is able to scatter the light, making it more visable.

It is best to toughen your glass when using it for a shelve, as many objects will be placed on it throughout its life.

There are two different types of LED strip used in this guide.  The recessed shelves at the back of the bar use super bright 12mm low profile LED strip from a company called TLC, you can see the product here on thier website.  This LED strip contains 60 LED’s per metre, prodiving an intense evenly distributed glow.  You will need to purchase a suitable power supply and control system for these.  This project used a 15A switch mode power supply (see product here), and an LED in-line LED tape controller (see product here).  There are plenty of cheaper LED strips on the Amazon store such as this one, most come with power packs. 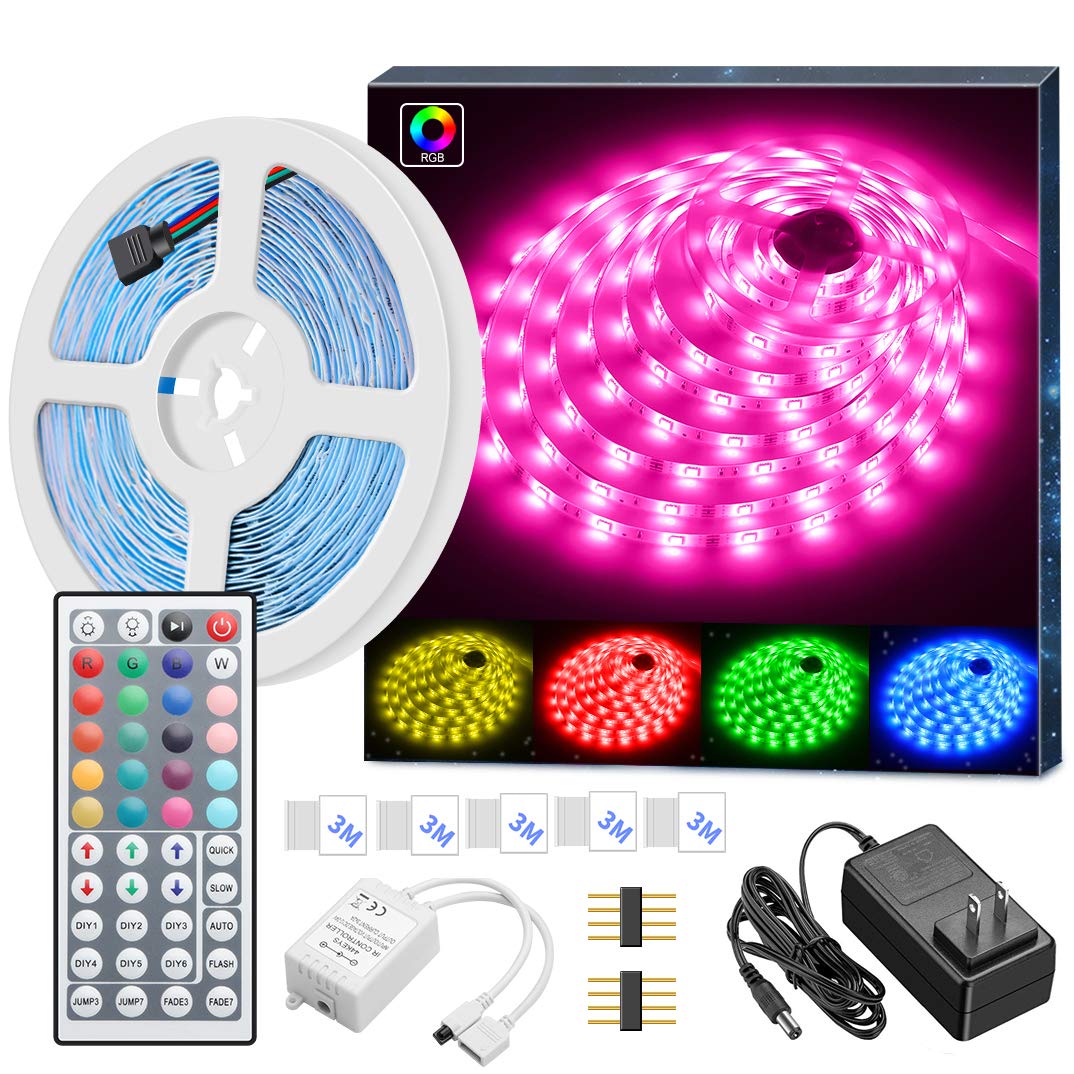 The recessed shelve on the left wall uses an intellgiant LED strip.  These type of LED strip lights create mesmerising and magical colour changing effects, as each LED can be controlled independtly via a built in program.  You can buy the same one used in this project from a company called TLC (see product here).  It comes with a power source and remote.  You can also buy simular intelligent LED striplight products on the Amazon store. 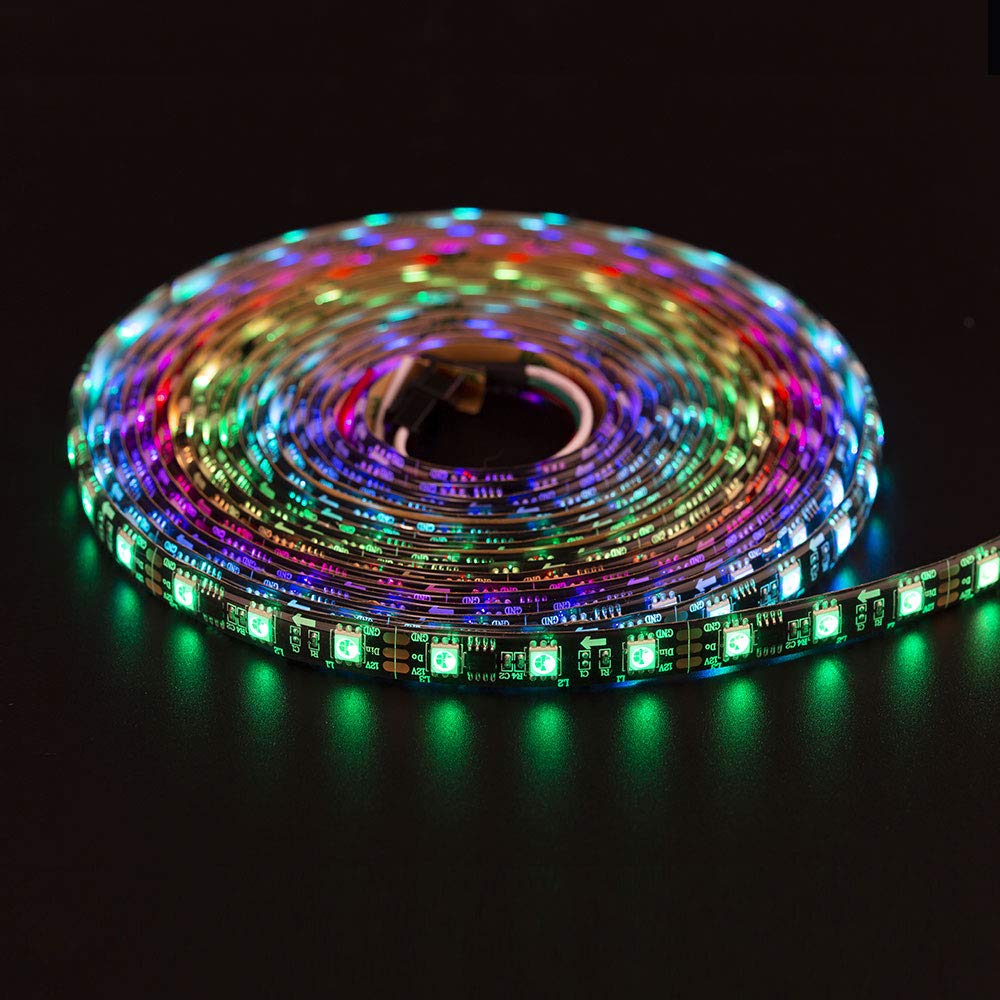 A recess in a wall is usually planned before an interior wall has been installed.  For example, the timber framing of an interior wall will contain an opening for the recessed shelf, as in the image below. 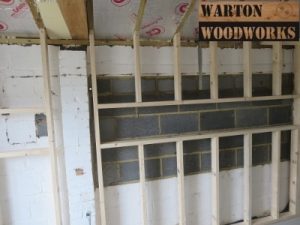 LED strips usually come complete with power wire and adaptor.  But the power wire is sometimes not long unough to reach the object you wish to illuminate.  There are two ways around this.  You could either install a power outlet close to your LED strip so your supplied power cable will reach, or you could extend the power wires.

If you do need to extend your power wire, it is essential you use thicker wires then the ones supplied.  This is becuase thinner wires have more electrical resitance than thicker ones, and can cause a substantial voltage drop over distances.  Thicker wires will ensure the necessary amount of current will reach your LED strip light.  The wrong choice of wire may stop your LED strip from working alltogether, cause it to flicker or behave irratically.

You can also choose to insulate the the viods within your timber framing with an acoustic insulation.  You can view our guide to soundproofing a garage or bar here. 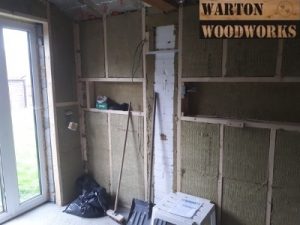 Then you simply plasterboard around the recess.  Before plasterboarding you need to ensure you run the necessary wires that will power your LED strips.  The recessed lighting for this bar project required a few metres of power wire for the LED strips, which could be controlled via a standard electrical light switch.  Please note that any wires between LED strips, and LED strip and power sources MUST be thick enough to handle the correct.  Using the incorrect gauage of wire WILL results in power loss, or incorrect functionally of the LED strips. 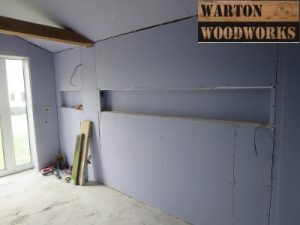 The best way to keep LED strip in place is to use an extruded aluminium channel.  You simply slide your LED strip into this channel, which not only protects from physical damage, but helps prevent thermal damage too as the metal acts as a heatsink.  The one we used for this project has an outer width of 17mm, and an internal width of 12mm, from a company called Taylor Lighting.

You will notice that the aluminium channel also has a frosted plastic cover.  The purpose of this is to diffuse and evenly distribute the light from your LED.  If you choose not to have a diffusor, then you may be able to see the individual LED’s light up through your glass.

Cut the alumium channel to the correct length, so that it will fit inside your recess.  You will then have to cut some LED strip from the roll, so that it is slightly longer than the LED channel.  Ensure you only cut LED strip where you see a copper pad.  Then feed this LED strip through your LED channel.  Below are images of an LED channel containing an intelligent LED strip, which has been placed into a wall recess.  You will notice the LED strip poking out of the channel has copper tracks.  Also there is the wire installed in a previous step, which needs to connect to the LED strip. 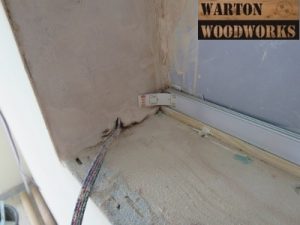 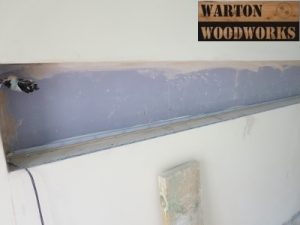 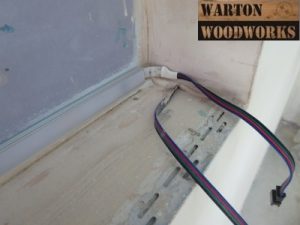 This LED channel is 17mm thick.  But your glass will probably be 6mm or 8mm thick.  To make up this difference in thickness, we installed 12.5mm plasterboard alongside the LED channel, as seen below.

This is where our glass will sit, but first you need to make sure you have a smooth surface.  Filling and sanding may be required. 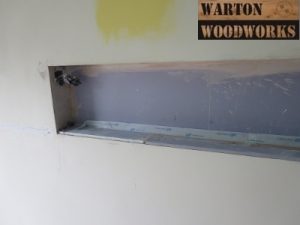 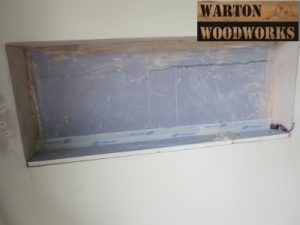 Next we need to make this surface slightly reflective, to enhance the LED lighting effect.  We found the easiest way to do this is to use aluminium foil tape.  Just simply stick this tape to this plasterboarded surface ensuring there are no wrinkles.

Make sure you use toughened low-iron glass, that is sandblasted on the top surface.  The glass shelve in the image below is 6mm thick.  The extruded aluminium channel (that contains the LED strip) is about 17mm.  To make up this difference in thickness, 12.5mm plaster was installed alongside the aluminium channel.  This means that the glass could then be placed on top of this plasterboard and become almost level with the aluminium channel top surface.  To enhance the lighting effect, we recomend you have a layer of aluminium foil between the glass shelve and plasterboard.